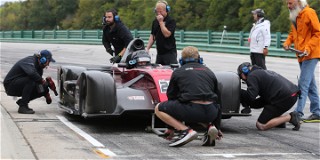 (Editor's Note: This article has been adjusted based on post-race penalties and now reflects official results.)

SCCA Runoffs races are designed so that they don’t require pit stops. At the 59th SCCA National Championship Runoffs — taking place Sept. 24-Oct. 2, 2022, at VIRginia International Raceway (VIR) — a full-length race is 15 laps, which is about 49 miles on VIR’s 3.27-mile, 18-turn circuit located along the border of North Carolina in Alton, VA. But on this Hagerty Race Day, drivers experienced a unique condition — heavy rain at Turns 11 and 12 at the south end of the race track, known as Oak Tree corner, while the north end of the track was dry.

After three days of qualifying, the Tire Rack Pole Award went to Todd Slusher of Las Vegas, NV in his No. 62 Cabo Wabo Elan DP02 Mazda. Outside on the front row was Jim Devenport of Alamo, CA driving the No. 23 Cranbrook Group Inc Elan DP02 Mazda. The second row included Chip Romer of Lake Havasu City, AZ in the No. 29 Stella Artois Elan DP02 Mazda, and Todd Vanacore of Ormond Beach, FL in the No. 19 Stor It Storage/Halifax Plantation Elan DP02 Mazda. Sitting in fifth place was the defending P1 National Champion Lee Alexander in the No. 48 One Motorsports/Factory48 Stohr WF1 Kawasaki gridded next to John McAleer of Roswell, GA in the No. 88 Omniventures Elan DP02 Mazda.

As the drivers prepared for their race, every car was outfitted with slick tires in anticipation of a dry track. From the paddock and grid, it seemed that the whole track was dry. However, a passing squall of heavy rain was drenching the southern end of the course as the cars headed out onto the track.

At the start, all nine drivers fell into a neat line in Turn 1, with Slusher taking the lead, Devenport in second place, and Romer in third. It all fell apart at Oak Tree, however. Slusher slid off track and impacted the tire wall, ending his race. Devenport also went off-track and found himself stranded on the wet grass at the exit of the corner. Cars went everywhere, scrabbling for grip.

“We got up there and it’s pouring rain,” said McAleer after the race. “It’s a downpour.”

When the field sorted itself out again, sixth-place qualifier McAleer was in the lead with a 6.463-second gap over Romer. Vanacore was running third as the full-course caution flag and safety car came out.

It was then that Romer made a critical decision to pit and change to rain tires. As the field circulated behind the safety car, Romer’s crew made a swift tire change that allowed him to rejoin the field at the back of the pack without losing a lap. Devenport also pitted for rain tires, but only after losing a lap stuck on the grass.

“I was already crying,” Romer said, “I knew they couldn’t call the race, so it was crazy.”

When the race went back to green for lap six, Romer and Devenport carried a huge advantage over the wet portion of the track, approximately a third of the total distance. The two drivers sliced their way past struggling cars running on slick tires until Devenport went around to drive his way through his lost lap, and Romer found himself in second place following McAleer.

The balance of the race — which was ended after 13 laps due to time loss during the caution — saw McAleer and Romer trade the lead several times. Romer would make a pass in the wet segment, only to have McAleer retake the lead on the dry portion. In the final laps, Romer made a pass and made it stick at the risk of grinding through his rain tires on the dry part of the track. At the checkered flag, it was Romer by 0.450 seconds over McAleer, and then about another 18 seconds back to third place, Jason Miller. However, McAleer received a penalty due to a technical infraction and was moved to eighth, advancing Miller to second and Vanacore to third.

“It was a good day for us,” Miller said, “finishing on the podium. It’s an advantage for me to be up with these guys.”

“It was treacherous out there,” Romer said. “This guy [McAleer] is the best rain driver I’ve ever seen. My hat’s off to him.”

In addition to claiming the championship, Romer became the first driver this year to earn an SCCA Super Sweep. To merit the award in 2022, a driver must win a U.S. Majors Tour Conference Championship, a Hoosier Racing Tire SCCA Super Tour Nationwide Points Championship, and a National Championship Runoffs race at VIR — all within a single class.

The top three drivers were greeted at the victory podium with a bottle of bubbly form Mazza Vineyards, the “Official Sparkling Wine” of the Runoffs.

The Sunoco Hard Charger award went to Greg Case in the No. 9 Hawk Stohr WF1 Suzuki, after starting eighth and finishing fifth.

Live, online video coverage of Runoffs races, presented by Mazda, is available throughout the three days of competition at SCCA.com/live, and at SCCA’s official YouTube and Facebook social media channels. Live timing and scoring for each race is also available at SCCA.com, along with an audio-only feed from the Super Tour Radio presented by Hoosier Racing Tire broadcast team.

Below are the final results for Saturday's P1 race at the 2022 SCCA National Championship Runoffs, with finish position, starting position in parentheses, driver, hometown, car, and laps completed.

Photo caption: Chip Romer on pit road during the yellow flag, changing tires to give him an advantage on the wet portion of the track.