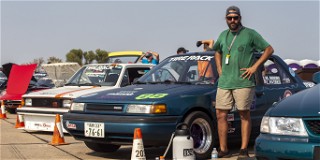 It’s the last day of the 49th Tire Rack SCCA Solo National Championships taking place Sept. 6-9, 2022, at Lincoln Airpark in Nebraska’s capital city. For drivers competing in the second half of this event, Friday is the last chance to secure a championship.

Follow Solo Nationals live online at sololive.scca.com where you’ll find current timing/scoring and event audio coverage. And be sure to check out @SoloMatters and @sccaofficial on social media for updates and photos.

“The car’s doing pretty good,” Matt said on grid following his Thursday runs in the No. 116 FSP Mazda Protegé. “My best friend passed away four months ago. This was his car. We were working on it the week before [he passed], getting it back together to get it back out here.

“He ran this car at Nationals,” he explained. “It was a different Protegé, but all the same parts. I got this car together and brought it out here to represent him.”

The plan was for Josh and Matt to build this Protegé in time for the Tire Rack SCCA Peru National Tour in June. “But then [he passed away], so I took the time to finish up the car and get it out here,” he said.

Making it to Lincoln Airpark for the 2022 Solo Nationals wasn’t easy. “I was about to not come because the car wasn’t completely done and a few things were missing, but members of our Club made sure everything happened,” Matt added. “It was a spur of the moment, let’s go out there and do it. A few guys in the Club stepped up, [Central Kentucky Region’s] RE David Patrick helped us out with the room – a dozen people helped us out.

Several FSP cars at the Solo Nationals don stickers in memory of Josh Perry. “[Josh and I] loved FSP,” Matt said. “The people are great – everybody coming up to you and shaking your hand before you race and saying good luck. You don’t get that in every class.

For the ninth consecutive year, the Wendi Allen Scholarship Fund supported a few women from SCCA’s Solo community. Award winners receive $1,500 to assist with travel to National Solo events, as well as free entries to any Tire Rack National Solo events during the year.

The three scholarship recipients for 2022 were Chelsea Tattershall, Maia Kirk, and Layne Lindemann -- all of whom participated in this year’s Tire Rack SCCA Solo National Championships.

At the ProSolo Finale, Tattershall finished 12th in Ladies Class 2. And in the Solo National Championships, she finished fourth in the Street Touring Ultra Ladies Class.

In the ProSolo Championship Finale, Lindemann finished ninth in the Ladies Class 2 field. At Solo Nationals, she and her 2019 Mazda Miata held the runner-up spot as of Thursday – an effort that clinched her the CSL National Points Championship win.

The SCCA Foundation is instrumental in making the Wendi Allen Scholarship Fund possible, and is accepting donations earmarked for that program. SCCA members can go to their My SCCA membership portal to make a donation.

SCCA In The News!

The news department at KOLN-TV in Lincoln, NE, seems to like motorsports. Almost every year, a reporter from the station shows up at Solo National Championships to check out what’s going on and learn a little more about SCCA and autocross. And with Solo Nationals being one of the largest competitive amateur motorsport events in North America, why wouldn’t send over a reporter when the activity is happening in your backyard!

Ellis Wiltsey was the lucky journalist KOLN-TV sent over this year, and she absolutely dug her visit. After talking with different competitors and gathering up footage for the story, Wiltsey actually hung out for a bit and enjoyed the action and atmosphere.

“The races themselves are unique. Racers are staggered, starting and ending by themselves. Track speeds are closer to highway speeds, about 75 miles an hour. Winners are determined by who clocks in the fastest lap times,” Wiltsey wrote in the online article that accompanies the video news segment. “For many, the love for racing has been passed down through generations. With those of all ages, genders, and skill levels getting their turn on the course.”

Check out the full story and video by clicking right here or on the image below! 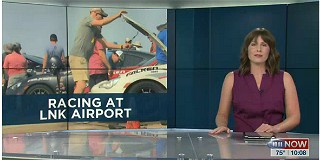 Keeping with this year’s Solo Nationals theme, which is Back to the Eighties, it was 1983 when Katrina And The Waves proclaimed, “I'm walking on sunshine … And don't it feel good!”

The 2022 Solo Nationals in Lincoln has been bathed in sunshine. Each and every day, blue skies and relatively light winds greeted attendees. Sure, it was a touch toasty with local temperatures in the 90s -- and perhaps a little warmer on Lincoln Airpark’s concrete that is wonderful for autocrossing. But all things considered, it was a fantastic week of weather.

Actually, conditions for the 2021 event were pretty sweet, too. That means Solo Nationals has been blessed with two consecutive years of great weather, which is a welcomed change compared to the three previous years leading to this current streak.

Think back to 2018, when heavy rains flooded the taxiways of Lincoln Airpark. It looked at moments as if a canoe could turn a faster run time at that event. Then there was 2019, which we’ll politely refer to as the Dust Bowl year thanks to a cement resurfacing project going on at Lincoln Airpark. And of course, we’ve got 2020 when many autocrossers would’ve gleefully accepted any sort of weather instead of sitting at home due to a COVID pandemic, which resulted in cancelation of the event.

September weather in Nebraska can vary from year to year, and the wind can wreak havoc at times. Still, autocrossers from around the country love their annual pilgrimage to Lincoln, which is why SCCA will be holding its Solo Nationals in the Cornhusker State through at least 2027.

Here’s hoping the weather from these last two years makes the same commitment.

Photo: Matt Moore and his Protegé