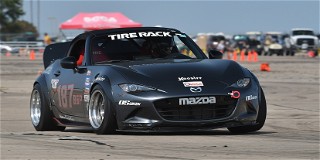 Drivers from more than 35 different car classes are competing Thursday/Friday at the 49th running of the Tire Rack SCCA Solo National Championships taking place Sept. 6-9, 2022, in Nebraska’s capital. After the first of two competition days for this second set of drivers, some interesting skirmishes are again emerging at Lincoln Airpark. Below is a quick glimpse at how some of the competition developed by Thursday evening. Complete results for day one of competition can be found by clicking sololive.scca.com where you can also follow all of Friday’s action live.

West Course (aka: Take On Me) Tuesday

The Solo Nationals theme this year is Back to the Eighties, and the 24-entry CAM-T class celebrated that fact Thursday as Emery Seaton, driving a 1988 Ford Mustang, eked out a lead of only 0.018sec over Chris Cargill in a 1985 Chevrolet Camaro. A full second back from Cargill is a 1999 Chevrolet Camaro Z28 driven by J.J. Mallrich, who came to Lincoln with the points lead and will be the 2022 CAM-T National Points Championship winner no matter what happens on Friday.

The tussle in X Prepared (XP) is incredibly close, too. That 15-entrant field is currently led by Dave Montgomery in a 1972 Porsche 914, who was 0.096sec faster than a 1993 Mazda RX-7 driven by Andy McKee. Teresa Neidel-McKee, who is co-driving with Andy, is 1.056sec further back in third.

Only 0.028sec separates first from second in Super Street Touring™ where Christopher Wanner leads Andrew Francis, with both men driving Chevrolet Corvette Z06s. Ziyi Wang, in a 2017 BMW M2, is third nearly a half-second behind Francis.

Then there’s B Street Prepared (BSP) where Austin Clark, driving a Mazda MX-5, has a 0.051sec advantage on Raymond Dsouza in a 2019 Mazda Miata in the 14-entrant field. A fraction of a second behind Dsouza is the 2004 Honda S2000 of Erik Strelnieks. But it will be Dsouza who, no matter what, walks away with the BSP National Points Championship this year.

In Super Street (SS), Doug Rowse and his 2018 Porsche GT3 have a 0.183sec gap on the 2010 Porsche GT3 of James Yom. And while it is still undetermined who will ultimately triumph in that 36-entrant field, we know for sure that Rob Clark will be the SS National Points Championship victor.

Super Street Ladies (SSL) is tight, too, as Tara Shapowal-Lau leads Langlee King by 0.460sec in the seven-entrant class. Friday will likely be a battle between those two, with Shapowal-Lau driving a 2018 Porsche GT3, and King a 2020 Chevrolet Corvette. King, however, will be the SSL National Points Championship winner.

And lastly, Brandon Porambo and his 2006 Porsche Cayman S have the lead in B Street (BS) by 0.213sec over a 2022 Toyota Supra of David Marcus. Another 0.378sec behind Marcus is Andrew Kessel in a 2019 BMW M2. But because Kessel had the BS points lead heading into Solo Nationals, he’ll at least be the 2022 BS National Points Championship winner no matter what happens on Friday.

Friday is the Final Day

The very last day of Tire Rack SCCA Solo National Championships competition begins at 8 a.m. CDT on Friday. Follow the action live online at sololive.scca.com where you’ll find current timing/scoring and event audio coverage. And feel free to check out @SoloMatters and @sccaofficial on social media for updates and photos.

There’s also the SCCA Inc. Facebook page where you can watch the Solo Nationals Morning Show, a daily video presentation beginning around 7:10 a.m. CDT where hosts keep everyone up to speed on the competition and interview special guests.

Photo: Austin Clark leads the BSP field heading into the final day of competition at the Solo National Championships.