Green-to-Checker: Playing Our Part on Track 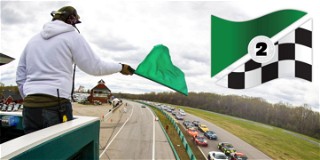 Even a cursory scan of SCCA Road Racing-adjacent social media will reveal a new movement for SCCA Road Racing designed to raise awareness of and reduce the number of on-track incidents during road races – the Green-to-Checker (G2C) movement.

The philosophy began as drivers and officials perceived an uptick in racing incidents, specifically at Hoosier Racing Tire SCCA Super Tour events. It was set into motion more formally through a letter sent to Super Tour drivers by Eric Prill, a fellow driver who is also the Vice President of SCCA Road Racing.

In the letter, Prill outlined data from the VIR Super Tour’s Flagging and Communications logs, which included interrupted sessions, total incidents through the weekend, and more. It was impossible to draw conclusions without historical data, but it did provide a baseline for data moving forward.

Prill ended that initial letter with a challenge to the drivers – himself included – as the Club continues to investigate solutions.

“Ultimately, there are many things that can influence change here,” Prill said. “And that all starts with us, the drivers. It starts with getting through Turn One. And then Turn Two, and all the way through Lap One, and so forth…and strive to go Green-to-Checker without interruption. It is a pledge to be the driver that you want everyone else to be.”

Since that late-April letter, the movement has continued to evolve. In a follow-up letter approximately 10 days later, Prill thanked drivers for their on-going conversation – many responded directly to SCCA’s Road Racing department, others carried out the conversation on social media, and face-to-face conversations at and away from the track were also had.

“In the first email, I shared the idea that all drivers, collectively, needed to work as one ‘team’ to have successful, uninterrupted sessions,” Prill said. “But as many of you have pointed out, the ‘team’ responsible for getting our sessions from Green-to-Checker extends beyond the drivers. It also includes officials, corner marshals, safety teams, rules makers, and event organizers. There are a lot of factors that can positively influence this G2C Movement. The communication to drivers is only part of that effort. This discussion is being had within many of the groups I referenced above. Each one of us can make a difference.”

SCCA President and CEO Mike Cobb weighed in as well, most publicly in the May/June 2022 edition of SportsCar Magazine, which is mailing to SCCA members right now.

“While conversations in and around this area have been ongoing for some time, the passion to engage fully in this now has been born out of an increase in on-track contact and other incidents which cause session stoppages, particularly at large Hoosier Super Tour events over the last couple of years,” Cobb explained. “Concurrently, we have also received comments through surveys, emails, and at events about the declining quality of driving and reduced green-flag time due to incidents at these events.”

Each acknowledge there isn’t just one fix for the situation, as incidents may be caused by various factors.

One tangible result of G2C so far has been a reorganization of the test-day groupings set for the Sept. 24-Oct 2, 2022, SCCA National Championship Runoffs at VIRginia International Raceway, where additional test sessions have been added to reduce on-track car counts.

Another result is the availability of G2C decals, which are available now through the online store at my.scca.com. G2C decals will also be available at numerous SCCA Road Racing events, including the WeatherTech Chicago Region June Sprints Hoosier Super Tour, taking place June 17-19 at Road America.