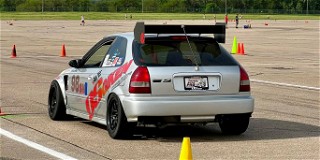 Memorial Day weekend is huge for motorsport fans. You’ve got the Indy 500, Monaco Grand Prix, a 600-mile NASCAR race in Charlotte – and the Spring Nationals in Nebraska for SCCA autocrossers.

Formally called the Tire Rack SCCA Lincoln National Tour, Spring Nationals took place May 29-30, 2022, at Lincoln Airpark. Because it’s held at the same location as the Tire Rack SCCA Solo National Championships, the mid-season gathering offered a warm-up before Solo Nats. That is why 325 people spent Memorial Day weekend together in Nebraska having #funwithcars.

Conditions on Sunday, the opening day of competition, saw temperatures in the upper 80s with predominantly sunny skies. Monday morning brought about stormy conditions, which delayed action a bit due to lightning. After the weather moved through, temperatures then sat in the upper 80-degree range once more – and the winds picked up to make things interesting.

The largest field of the weekend, that of Street Touring™ Sport with 19 entrants, also had one of the tightest battles. After three runs on Sunday, Riley Heaton had a 0.033sec lead on David Whitener. That battle remained close on Monday, with both drivers in 1992 Mazda Miatas. On his final run, Heaton was able to create some breathing room, and went on to win by 0.149sec over Whitener. Adam Barber was third in a 1988 Honda CRX Si. Kim Whitener was fourth in the Mazda Miata she shares with David Whitener, and Andrew Salazar was fifth in a 1990 Mazda Miata.

The Solo Spec Coupe class came ready to play in Lincoln with 18 entries. That field was headed Sunday evening by Andrew Canak, in a 2014 Scion FR-S, who had established a lead of 0.088sec over a 2016 Scion FR-S driven by Mason Herrick. Only 0.044sec behind Herrick was Joey Green in a 2015 Subaru BRZ

Things switched around on Monday, as Herrick turned in a final run of 58.771 to emerge victorious by 0.336sec over Canak. Green finished third, and Kevin Dietz fourth in a 2013 Scion FR-S. Fifth was David Spratte in a 2016 Scion FR-S, with the final trophy going to Layton Cater 2013 Scion FR-S.

Solo Spec Coupe Ladies was a nail-biter, too. Jennifer Bedell led Kate Fisher by 0.455sec on Sunday evening in that 11-entry field, with both drivers competing in 2016 Scion FR-S cars. Fisher then made a mighty go of it on Monday, cutting into Bedell’s lead. But it wasn’t quite enough, as Bedell held on to victory by 0.056sec over Fisher. Chris Peterson was third in a car she shared with Bedell, and Meredith Brown was fourth in a car she shared with Fisher.

While it wasn’t a large class, E Modified Ladies perhaps provided a glimpse into the future. In EML you had 13-time National Champion Shawn Kiesel going head-to-head with her daughter, Kaila, using the family’s 2020 KFR Turbo Sprite. Shawn came out of the weekend on top, but she only managed to conjure up a gap of 0.054sec on Sunday. As Kaila’s experience continues to grow, could we be looking at a new E Modified queen?

The National Tour points chase for 2022 is in full swing, and we’re starting to get an idea of who the contenders will be when the 10 points-paying events conclude in early July at the Tire Rack SCCA Packwood National Tour stop.

Keep pace of the points race throughout the Tire Rack Solo National Tour season by clicking the link below. Points are usually updated a few days after each event, and remember that a driver’s three best-scoring performances count toward a season total. Competitors must also attend the 2022 Tire Rack SCCA Solo National Championships in Nebraska on Sept. 6-9 to be eligible for year-end points recognition. However, results from the Solo National Championships will not count toward points totals. Rather, Solo Nationals finishes will be used as tiebreakers.

SCCA autocrossers get only one weekend off before it’s time to attack the cones again, this time in Indiana for the June 10-12, 2022, Tire Rack SCCA Peru National Tour at Grissom Aeroplex. Peru registration is open, as is registration for the June 17-19, 2022, Tire Rack SCCA Finger Lakes National Tour being held at Seneca Army Depot in Romulus, NY.