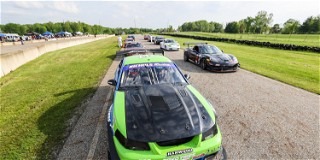 The green flag waved today on the inaugural SCCA Enduro National Tour, catapulting SCCA back into the endurance racing spotlight. SCCA was once front and center in enduro racing, launching an endurance race in the mid-1980s that ultimately became the professional racing series World Challenge (now SRO Motorsports America). As time went on, SCCA largely seeded endurance racing to other sanctioning bodies, with the Club opting to concentrate on sprint racing instead. With today’s green flag, that changed.

The May 20-22, 2022, SCCA Enduro National Tour Presented by Summit Racing Equipment at Nelson Ledges Road Course saw numerous teams head to Garrettsville, OH, to try their hand at a pair of eight-hour SCCA endurance races during the weekend.

As the birthplace of “The Longest Day of Nelson,” Nelson Ledges is no stranger to enduros – in fact, that’s the race that launched the aforementioned World Challenge series. Bringing this full circle, NEOhio Region, which hosted those early endurance races, was integral in this weekend’s SCCA Enduro National Tour at Nelson Ledges.

“The SCCA Enduro National Tour launches in 2022 as a four-track series,” explained Jon Krolewicz, SCCA’s Event Lead for the Enduro National Tour. “The National Tour launched today at Nelson Ledges, then the Tour travels to VIRginia International Raceway on Aug. 6-7, followed by Buttonwillow Raceway Park on Nov. 19-20, and concludes at MSR Houston on Dec. 10-11. While each race weekend is independent of each other, the event’s feel will remain the same, offering drivers the same welcoming, fun environment and flexible ruleset whether you’re on the East Coast or the West Coast.”

Being the first weekend of a pilot program, the entry count was far from packed, but the field was as undeterred as it was enthusiastic.

Unlike sprint races, SCCA Enduros are made up of teams, with each team being required to place at least three drivers behind the wheel during an eight-hour race. Also unlike sprint races, vehicles are divided into four classes, from E1 (the fastest) to E4. At Nelson Ledges this weekend, entries ranged from an E1 Ford Mustang campaigned by Team Nichols Racing to an E4 Toyota Corolla, with Team Toyota R&D Motorsports at the helm.

Practice and qualifying for Saturday’s eight-hour enduro took place on Friday, May 20, with Team Nichols Racing rocketing into the overall pole position over the other three classes – although things were complicated slightly with the last-minute addition of an EX class, allowing the Mike Lally team to compete despite a non-safety related classing infraction.

While practice and qualifying seemed straightforward on paper, the reality was quite the contrary, as Team Conover Motorsports found themselves combing the local area for parts after taking damage in their E3 VW Rabbit, and Grass Paddock Motorsports experienced an engine failure in their E4 Mini, resulting in a drive to Detroit to retrieve a backup car – another Mini.

Saturday’s green flag flew around 9 a.m. EDT on Saturday, May 21, and with it came nearly eight hours of racing. It was that “nearly” that likely decided the overall win.

The EX-class Mike Lally team pulled into the lead, with Team Nichols Racing close behind leading E1; E2’s Junk Player Special III team sat third overall. A differing strategy kept the slower Porsche 944 of Junk Player Special III in striking distance of the Team Nichols Racing Ford Mustang – a battle that turned into one for the overall lead when the Mike Lally team was sidelined at the six-hour mark.

With less than one hour to go in the first eight-hour SCCA Enduro National Tour race, second-place overall Junk Player Special III’s nimble Porsche faced an on-track deficit to Team Nichols Racing’s powerful Mustang for the overall lead, but the fuel economy advantage went to the Porsche as the day’s checker neared.

Just two laps down to the E1 Mustang, the E2 Porsche was pushing hard, likely trying to force the hand of Team Nichols Racing when it came to the delicate balance of fuel economy vs. overall speed. But that battle was not to be, as a nearby lightning strike brought out the checker on lap 299, some 37 minutes early. While the Junk Player Special III team won their class, it was Team Nichols Racing that saw the checker first.

Racing continues on Sunday, May 22, with the green flag dropping at 8 a.m. EDT on the second eight-hour SCCA Enduro National Tour race of the weekend. Follow along via live timing and scoring at scca.com.