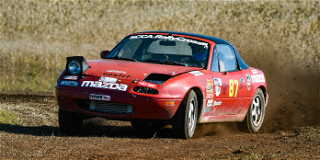 RallyCross remains SCCA’s most widespread and readily accessible form of extreme dirt motorsports. Below is a list of 2021 RallyCross award winners as announced by the RallyCross Board.

TripleCross honors go to those drivers who win a Regional event, a National Tour and a National Championship in a single class during a competition season. Winners in 2021 were Shawn Roberts, who competed in the Prepared Rear Wheel Drive (PR) class; and Mark Hill, who drove in Prepared All Wheel Drive (PA).

Roberts, a member of the Washington DC Region, has been racing in RallyCross for many years in a crystal blue Mazda Miata, winning multiple Regional RallyCross events in 2021. He then triumphed at the Eastern Tennessee National Tour before repeating as the PR SCCA National Champion during the 2021 RallyCross National Championship.

Hill, who competes in a white Mitsubishi Evo IX in the PA class, is a member of SCCA’s Kansas Region. In 2021, Hill gathered multiple Regional RallyCross wins and overall fastest times, and then won his class at the St. Louis National Tour before clinching his third consecutive RallyCross SCCA National Championship title.

Presented annually to recognize an individual making an extraordinary impact on the sport of RallyCross, this award recognizes contributions over time that produce a positive influence across the country. The 2021 Dirty Cup Award winner is Steve Hyatt, of SCCA’s Susquehanna Region, whose tireless involvement has helped grow the RallyCross program into what it is today.

In 2013, Hyatt was appointed to the RallyCross Board, and in 2014, he became the RallyCross Board’s Chairman, serving for five years. During that time, he labored to promote and grow RallyCross by working in concert with SCCA’s Board of Directors to supply vital program support. Over the years, he launched new programs, collaborated with sponsors, and focused on growing the National RallyCross program.

Hyatt played a key role in the creation of RallySprint and RallyTrials by drafting the original rulesets. He engaged in developing the ruleset for the Constructor class and envisioned the introduction of UTVs to the sport. Having a keen eye for rules creation, he skillfully managed to keep rulesets concise. And if that wasn’t enough, Hyatt has also been involved in his Region’s leadership, lending a helping hand in the organization of RallyCross National Championship events.

This award is presented for an outstanding effort in competition or organization of the RallyCross National Championship. Whether it’s overcoming an obstacle to compete, or an act of stewardship that made the event better for all, award winners demonstrate a dedication to RallyCross’ championship event. The three previous True Grit winners work together to select a new recipient each year, and they have named the 2021 True Grit Award winners as Warren Elliott and Hal Denham.

Elliott and Denham, both members of SCCA’s New England Region, are a dynamic duo when it comes to volunteering at RallyCross Nationals. The two men have attended every RallyCross National Championship and exert tremendous personal effort behind the scenes. Denham and Elliott traditionally arrive on site on Wednesday night and work diligently Thursday to help setup the event, which includes laying out grid and paddock spaces, as well as completing other tasks no matter the weather conditions. Then they dutifully fill their assigned worker positions during the event. In 2021, the duo worked grid and helped keep the event flowing efficiently so drivers could get as many runs as possible.

The Spark Plug Award recognizes those who put forth an outstanding effort in promoting and publicizing RallyCross using multimedia to further the recognition and growth of the sport. Ohio Valley Region’s John England is the 2021 Spark Plug Award recipient.

During the last several years, England has consistently promoted RallyCross through social media. He has creatively used the medium to bring intrigue and interest to the sport through daily photo updates that offer meaningful and fun content on behalf of the program. Specifically, England’s efforts did much to significantly promote the RallyCross National Championship in 2021, and he continues to be an incredible asset for those seeking more information online about RallyCross activities.

RallyCross Division of the Year

This award is presented in recognition of a Division’s activities in RallyCross for a new or ongoing program. This may include events, promotions, attendance, innovation in public relations or other activities. Nominations for this award are made by RallyCross participants, and the winner is then selected by the RallyCross Board. The RallyCross Division of the Year for 2021 is the Southern Pacific Division.

Part of the RallyCross program almost from its inception, the Southern Pacific Division saw a nearly 200% increase in attendance in 2021 following a 2020 season hampered by COVID. Furthermore, the Division brought aboard a new faction to the National RallyCross program, that being SCCA’s Big Island of Hawaii Region.

RallyCross Region of the Year

This award recognizes a Region’s activities in RallyCross for a new or ongoing program. This may include events, promotions, attendance, innovation in public relations, event participation or other activities. Nominations are made by RallyCross participants, and the eventual winner is selected by the RallyCross Board. The RallyCross Region of the Year for 2021 is the Ohio Valley Region.

Ohio Valley Region also successfully promotes the sport through social media outlets to grow the program at both a Regional and National level.

To all the RallyCross award recipients, thank you for your fantastic dedication, and congratulations!