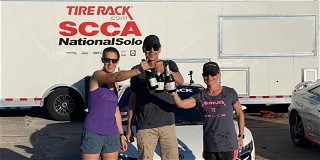 Competitors were greeted by two challenging and very different courses. The slalom and offset intensive “right” course launched on concrete, but the surface then changed to asphalt after the very first turn. The “left” course, which was about two seconds faster and entirely on concrete, featured an opening slalom and plenty of sweepers.

The 23-car Bump class was the largest field at the Tire Rack South Texas ProSolo. Cameron Goode, driving a Tesla Model 3, initially held the lead after the first session. But Doug Rowse, in a Chevrolet Corvette, took command by the second session. Vivek Goel came out swinging Sunday morning in a Mazda MX-5 to jump from fifth to second. However, he fell short of Rowse’s mark by 0.378 second and finished in the runner-up spot. Chris Levitz, driving a Chevrolet Camaro, was third; and Daniel McCelvey came fourth in a Mazda MX-5. Goode slid to fifth, and Brad McCann sixth in a Honda Civic Si. Evan Slate claimed the seventh and final trophy spot driving a Porsche Cayman.

CAM put on a show as Jacob Crow led the way most of the weekend in a Ford Mustang GT. His co-driver, Matt Morhardt, had something to say on the matter and narrowly edged out Crow with his only clean run during Sunday morning’s session. After two days of competiton, Morhardt’s margin of victory was only 0.093 second over Crow.

The A Street battle came down to the wire with Zack Barnes, in a Chevrolet Corvette Z06, pulling out a win by only 0.076 second over a Porsche Cayman wheeled by Eric Davis. That victory wasn’t decided until final runs Sunday morning. Taking the third and final trophy position was Brian Franke in a Porsche Cayman GTS.

Bonus Challenge: Laura Harbour, driving a Toyota Celica, and Daniel Seelig, in a Nissan 370Z, faced off in the final portion of the Bonus Challenge. Harbour got there by defeating the Mazda MX-5 of Pat McCelvey, and Seelig claimed his spot by eliminating a Mazda Miata driven by Michael Adrian. Both drivers recorded clean runs, but Harbour emerged as the Bonus Challenge winner by nearly a second.

Ladies Challenge: It was Caitlin Dunlap, in a Mazda Miata, against Kelsey Karanges, driving a Scion FR-S, for Ladies Challenge supremacy in South Texas. Dunlap eliminated Laurie McCelvey, in a Mazda MX-5, to get to the final battle; and Karanges earned her spot by beating Nicole Wong in a Chevrolet Corvette. With the time discrepancy between sides, the pair was in a virtual tie when they switched sides. When they crossed the finish lines a second time, it was Dunlap with the victory by 0.2 second over Karanges.

Super Challenge: There were many exciting and nail-biting matchups throughout the 32-competitor Super Challenge field. The unique differences between courses meant drivers who were “up” on time through the “first side” often got leapfrogged on the “second side.” It all came down to Erik Strelnieks vs. Darrin DiSimo. In an Acura NSX, Strelnieks took the victory after cutting a 0.520 light on the second course despite having a multi-second advantage by virtue of the cone DiSimo hit in his Mazda MX-5. Eric Anderson was the victor of the third place runoff in the new-to-him Lamborghini Huracan.

While the Tire Rack ProSolo season is now complete, SCCA’s National Solo season still has “one to go.” Coming up next is the Dec. 3-5 Tire Rack Axis vs Allies Champ Tour stop at Spence Field in Moultrie, Georgia − a site that has not been visited by an SCCA National Tour in over 25 years. Registration for that event is open now!