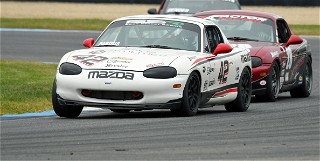 Did you know the Hoosier Racing Tire SCCA Super Tour point race isn’t over yet, even though the last Super Tour race of the season was held at Watkins Glen a few weeks ago?

That’s because the season-long point chase includes the SCCA National Championship Runoffs at Indianapolis Motor Speedway, Sept. 28 through Oct. 3. And while the Runoffs may be the “Super-est” of all the Super Tours, the regular season still counts for a lot — including grid position.

The Super Tour point standings double as the grid for Tuesday’s opening day of qualifying — those without Super Tour points will be gridded following the point scorers based on order of entry — so those leading each class are sitting P1 and have the chance to stay there all week long.

The Hoosier Super Tour regular season may have been even bigger for the First Gear Mazda Challenge (FGMC), designed for SCCA First Gear members under the age of 25 as of the end of January 2021 in the Spec Miata class.

As announced, the FGMC point leader at the conclusion of the Super Tour season earned a free entry to the Runoffs— but there’s a twist this year.

The point leader is the OG of the FGMC, Preston Pardus. The twist is, as a Super Sweep winner in 2020, Pardus has already earned a free entry to this year’s Runoffs. Instead, Mazda and SCCA have awarded the entry to the vice-leader, Travis Wiley!

The young Texan has also clinched the Southern Conference of the Majors tour, which is a big deal (as it is for Pardus, who owns the Southeast title along with the Super Tour championship). By virtue of their Conference championships, as well as for Boris Said Jr. out West, the trio will receive a set of tires from Hoosier. Because they’ve beat more than four other eligible FGMC drivers, Wiley also earned a nomination for the 2021 Idemitsu Mazda MX-5 Cup Shootout. (Pardus would have, as well; but as a pro driver, is not eligible.)

The Mid-States, Northeast and Northern Conferences are still undecided, with U.S. Majors Tour races remaining and multiple drivers in contention.

All racers can register for the SCCA National Championship Runoffs beginning Wednesday, July 14 at 11 a.m. EDT. Links, schedule and supplemental regulations can be found on the event page at SCCA.com/Runoffs.

Those currently leading each class in the Hoosier Super Tour standings and eligible to lead the field onto the track for the Q1 session are: