The Playground that is Hallett Motor Racing Circuit 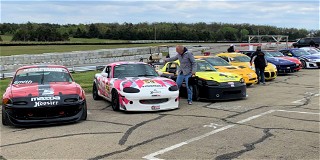 Anyone who has grown up or been around auto racing for a number of years has their “home” track. For some that may be well-known locales like Road America, Mid-Ohio, Circuit of the Americas, Sebring or Watkins Glen. For so many others, home (and where their hearts are) is a special place not normally seen on TV broadcasts. These locations have names such as Pacific Raceways, Blackhawk Farms, Thompson, Nelson Ledges, Roebling Road and Pueblo to name a few. Hallett Motor Racing Circuit, site of this weekend’s Hoosier Racing Tire SCCA Super Tour, falls within this latter category.

Four Decades of Oklahoma Road Racing
As the premier amateur road racing series in the U.S., the Hoosier Super Tour visits several tracks around the country each year. Some circuits are top “pro” tracks offering the best quality racing surface, amenities, and a record book featuring the biggest names in all of motorsport. Other tracks are on the schedule because they’re the best “club” courses in the country, where challenging layouts are matched with warm hospitality and a “family feel” to the paddock area -- and that’s a definition that fits Hallett to a T.

Since opening in 1976, Hallett has played host to virtually every type of motorsport event. Whether it's professional auto racing, regional club racing or motorcycles, Hallett’s 1.8-mile, 10-turn course found 35 miles west of Tulsa, Oklahoma, has seen them all. With over 80 feet of elevation change, the track is considered technically challenging and can be run clockwise or counterclockwise ­ making for two completely different racecourses. The Hoosier Super Tour runs the counterclockwise layout, and has done so since the series’ creation five years ago.

Clubhouse for MiDiv and SOWDiv Road Racers
Other tracks located in the middle portion of these United States have come and gone over the years. Heck, some tracks have come, gone, and then reemerged. But Hallett has persisted since its inception. Year after year after year, the venerable circuit nestled in the rolling Osage Hills has hosted events -- events attended nearly religiously by a faithful following of racers. As such, Hallett has put in the time and done the work to build a history, and it’s an endearing history at that.

Mark Weber is a longtime SCCA road racer competing this weekend in E Production during the Hoosier Racing Tire SCCA Super Tour. He has seen a pretty good chunk of Hallett’s history in person. He made his first trip to the track in 1977 and found a way to visit the facility at every given chance since then. Sure, the track has been resurfaced over the years, and facility infrastructure upgrades have occurred, but it’s still the same great place through Weber’s eyes.

“It’s a fun track because of elevation changes and interesting, interesting corners,” Weber states. “It’s a road course and a road course only. They never diluted it with a drag strip or a short oval or any of that other stuff. Hallett has been consistently there, and that’s incredibly important to the racing community. It’s a favorite of everyone in the Midwest. We’ve been going there a long time … and we still have a great time.”

On the other end of the spectrum is Logan Stretch, a Spec Miata competitor racing this weekend at Hallett in only his third-ever Hoosier Super Tour event. At 17 years old, it’s Hallett that has been witness to Stretch’s formative years.

“One of my earliest memories of being at a racetrack was at Hallett. I must have been 4 or 5 years old,” said Logan, son of Bob Stretch who is also competing at this weekend’s Hoosier Super Tour in the GT-2 class. “Hallett is one of my favorite places and has been for a long time because of the general mood around the track as compared to other tracks around the country. Hallett has a friendlier tone. It just seems like a closer community in the paddock at Hallett, and I think that ties back to the track’s management all these years.”

Of course, Hallett has its adorable nuances that make it special. Breakfast, for instance, is a “must” to grab from the café. Lots of tracks have “signature” grub, such as Road America’s brats. But at Hallett, you’ve got to go get the café breakfast. It’s something so many people look forward to each visit.

No morning at Hallett is complete without the “chicken song" delivered over PA speakers. A grating version of Glen Miller’s “In the Mood” as clucked out by Ray Stevens, the raucous anthem brings a smile like a really bad “dad joke.” It’s a cacophony recorded by many on their smartphones in the paddock, and also serves as an anthem reminding folks it’s time to get up and get ready to race.

The paddock, too, has a predictable and comforting feel. Sure, you’ll find youngsters peddling around on bikes and cheering in the grandstands, but the paddock is also like an established neighborhood. Looking for a specific driver? Well, persons can likely be found in paddock spots they’ve held for the last five years, ten years, two decades or more! It’s a consistency that truly builds a sense of belonging at Hallett. It’s a gathering spot one year to the next; a family reunion of sorts for those in the SCCA motorsports community.

“People” Make Hallett Great
Weber and Stretch, as well as many others, noted that “people” make Hallett a wonderful venue. That doesn’t apply just to competitors. It’s track management and SCCA volunteers who have really sealed the deal as far as Hallett being a destination venue for many.

In 1997, the Sports Car Club of America regions of Wichita and NeOkla joined forces to form the Arkansas Valley Race Group (AVRG). The principal reason behind formation of AVRG was to combine the strengths of the two regions in hosting SCCA Club Racing at Hallett. In 1998, the Oklahoma Region joined AVRG. The combined strength of these three regions hosting events at Hallett has resulted in great competition at the venue through the years.

Consistency amongst volunteers may also very well play a role in the cordial atmosphere found at the track. There are plenty of valued volunteers who have years of knowhow working SCCA road racing events at the venue and are quintessential to the Hallett experience. A perfect example is Registrar Betty Martin who has been part of the SCCA scene for 55 years.

“I started because my husband volunteered me,” Martin joked about her SCCA involvement. “I’ve been coming to Hallett since it has been open.”

If you can’t be at Hallett Motor Racing Circuit to enjoy the venue and people during this weekend’s Hoosier Super Tour, follow along online at SCCA.com/Live or click the banner on the front of SCCA.com to access live timing and scoring, as well as live video and qualifying/race calls supplied by Hoosier Super Tour Radio. And be sure to check out the SCCA Road Racing Facebook page to watch post-race winner videos and victory podium celebrations.

Photo: On the grid at Hallett Motor Racing Circuit