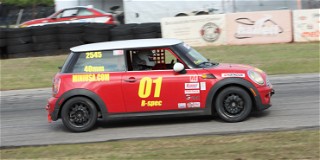 First!: With 25 cars taking the green flag, Spec Miata (SM) was the second-largest class to take the track Saturday. Usually, the SM class has the circuit all to itself. This weekend, however, the 10-car B-Spec class was added to the fray.

Under cloudy and cool conditions, polesitter Jim Drago took the early lead with Matt Reynolds chasing. Meanwhile, back in fourth, Travis Wiley in the No. 28 G-LOC Mazda Miata was mixing it up with other competitors as he plotted his advance.

Third by lap seven, Wiley moved to second on lap eight and then on to the lead by the 11th lap. From there he created a gap of 2.5 seconds on his way to victory over Reynolds in the runner-up spot and Drago in third. For Wiley, this was his first Hoosier Super Tour win.

“I had some good luck,” Wiley, 17, admitted after the race. “I was able to slowly work through and catch up to them, and get a good run on ‘em. Then I just got lucky and saw an opportunity and I decided to take it.”

And did racing with B-Spec cause any issues for Wiley?

“It was a little bit tricky. We definitely had to be more ‘heads up’ while driving and racing, and make a little more strategic moves,” he said. “But it was fun to race with them.”

Perfect Attendance: This weekend’s event at Hallett begins the second half of Hoosier Super Tour’s 10-event 2021 calendar. Competing this weekend in Oklahoma is B-Spec racer Fritz Wilke in the No. 84 Ford Fiesta. He has managed to compete at every Hoosier Super Tour event this year and sits third in the B-Spec Nationwide Points chase with his best results so far being a pair of runner-up finishes at Buttonwillow Raceway Park.

“Our plan was to do all the Hoosier Super Tours,” Wilke said about his competition season. “It’s a bunch of tracks we’ve never been to. The only track I’d raced at before was VIR. Sebring, COTA, Road Atlanta, Buttonwillow, Hallett … I’ve never raced at any of these tracks. We wanted to try new tracks and have new experiences.”

“It has been a blast,” Wilke continued. “We love exploring and finding new places to go grab dinner or other cool, new places. It’s kind of like a camping adventure.”

On Saturday, Wilke finished fourth. Up front it was Chris Taylor and his No. 34 Mazda 2 who opened the 25-minute race with the lead. Former B-Spec Runoffs champion David Daughtery, however, moved to the front by lap four in his No. 01 Hoosier Tires/G-LOC Brakes/Babyface Fabrication Mini Cooper. Perhaps unsurprisingly, Daughtery never waivered and took the win Saturday. Taylor was second and the No. 91 Honda Fit of Kent Carter was third.

“It was exciting,” Daughtery said of the race. “With the Mini, I just kept my head down and turned good, consistent laps.”

Being There: Another driver earning a gold star for Hoosier Super Tour attendance so far in 2021 is Sergio Zlobin. The Touring 4 (T4) driver has had a solid season in his No. 18 Mazda MX-5 Miata with wins at Circuit of the Americas and Michelin Raceway Road Atlanta. He also came into the weekend ahead in the Nationwide Points standings for the class.

On Saturday at Hallett, however, Zlobin left the race on lap two. Up front it was all Brian Laughlin in the No. 27 Mazda/Hoosier/Trees Done Right Mazda MX-5 Miata. The No. 119 Subaru BRZ of Angelica Sprehe finished second and Garrett Mays came third in the No. 44 Pontiac Solstice.

“It was a good race,” Laughlin said. “We qualified quite a bit ahead of second and third. It was really just up to me to hold on to it. But it was a good, clean race. Overall, I’m just glad to be here.”

Saturday Winners: On track Saturday were seven group races, each 25-minutes in length at the 1.8-mile, 10-turn Hallett Motor Racing Circuit, the sixth Hoosier Super Tour race weekend of the 2021 season. Below are provisional winners. Post-race winner video interviews can be found here on the SCCA Road Racing Facebook page.

More information about the Hoosier Racing Tire SCCA Super Tour from Hallett Motor Racing Circuit, including full results, can be found at the event webpage .

Photo: B-Spec racers always seem to find a way to have a blast. David Daughtery and his Mini Cooper had a little extra fun Saturday winning the B-Spec class during the Hoosier Super Tour at Hallett Motor Racing Circuit.