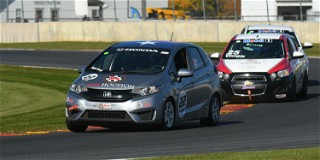 Road America is a challenging track for the low-power subcompact B-Spec class. The long straights and 160-foot climb from Canada Corner to the finish line require a plan, and 25 drivers gamed out their strategies for this year's championship. The top nine drivers laid down qualifying times faster than the existing qualifying lap record at the 57th SCCA® National Championship Runoffs® on Road America’s 4.048-mile, 14-turn circuit in Elkhart Lake, Wisconsin.

The Tire Rack Pole Award winner in B-Spec was 10-time National Champion—two time B-Spec champion—David Daughtery of Rock Hill, South Carolina in the No. 01 CCR/Hoosier 2008 Mini Cooper. Outside on the front row sat 17-year-old Riley Salyer, from Longview, Texas in the No. 22 MSR Houston 2017 Honda Fit. The second row included last year's runner-up Tony Roma of Beverly Hills, Michigan driving the No. 55 Mobil 1/Mr Peel 2012 Chevrolet Sonic on the inside and last year's third-place finisher Brandon Vivian of Milford, Michigan in the No. 25 Mobil 1/Charlie's Still on Main Chevrolet Sonic. The 2019 defending champion, John Philips of Sealy, Texas, started this year's race in fifth position in the No. 1 Hoosier/G-Loc/Toyota/PRP/Cars 2008 Toyota Yaris.

A Runoffs race at Road America covers 13 laps, and the conventional wisdom about a B-Spec race is that the first 10 laps are all about being ready for the last three. That's what happened this year.

"On the first lap you sort out your running order," Vivian explained. "We got four of us out in front, but if you fight you'll just bring the whole pack to you."

Polesitter Daughtery set a slow pace up to the flag and cleanly took the lead heading into Turn 1 with Salyer taking up second, Vivian third, and Roma slotting into fourth position. With the lead train established, the racers set out to put a gap on fifth place Philips, who was leading his own train of several cars. A swarm of mid-pack bees followed the two lead trains.

With just a few changes in the lead, that's how it went for the next 10 laps. The four leading cars worked on putting distance between themselves and the rest of the field, while Philips—with his train—tried to catch them. On the fifth lap, teammates Vivian and Roma took the lead over from Daughtery, shuffling him back to fourth in the lead pack. "It was more opportunistic than premeditated," Roma said.

As the field crossed the line for the tenth time to begin the all-important end game, Vivian still held the lead, followed by Daughtery, Salyer, and Roma, with Philips and his train safely 14 seconds back. Salyer made a move on Daughtery heading into Turn 1, smoothly driving past the veteran champion to take up second place. The young contender then tried to pass Vivian heading into Turn 5, but lost momentum and was shuffled back to third behind Daughtery and ahead of Roma. The shuffling allowed Vivian to open a small gap, but without a drafting partner the space was quickly closed up again.

The surprise drama took place on the 11th lap, when Daughtery suddenly slowed on the exit of Turn 5 with a reported fuel starvation issue that proved fatal for his chances at the lead on the climb to Turn 6. Daughtery dropped back out of the lead pack, but maintained fourth position about 10 seconds ahead of Philips. Salyer took over second position, which is the catbird seat for a B-Spec race because of the drafting advantage over the leader.

As the white flag came out to indicate the last lap, Salyer was clearly looking for his way into the lead. The young racer bobbled a bit in Turn 14 heading up to the white flag and Roma looked to capitalize on the error, but couldn't out-drag Salyer up the hill. Salyer took another look around Vivian in Turn 6, running two wheels off on the grass at the exit, but couldn't find a way around. The moment of truth came at Turn 12, Canada Corner, when Salyer got a run on Vivian and pulled alongside through the Billy Mitchell curves. Salyer emerged in the lead, and led the field up to the checkered flag. Vivian finished second, and Roma held on for third place. Farther back, Daughtery and Philips rounded out the top five.

"It doesn't even feel real," Salyer exclaimed in Victory Circle. "It feels amazing." The first-time champion will also race in H Production later this weekend, but has his eyes set on more racing in the future. "I want to move up to pro racing, but I need to find a sponsor," he said.

Vivian was naturally disappointed but had praise for Salyer. "We have really good camaraderie and close racing in B-Spec," he said. "It comes down to the last lap, and Riley drove a better last lap than I did. It was a great race, really fun, and I'm glad to represent the class on the podium. Congratulations to Riley."

Roma said, "The race went pretty much to plan except for the finishing order. I'm happy to make the podium." Notably, Roma ran the race on a replacement engine and transmission he sourced from a junkyard after a mechanical failure in testing. "We barely got it on track for Tuesday's qualifying," he reported. "That's the thing about B-Spec. You can make it to the podium on a junkyard engine."

The Sunoco Hard Charger for B-Spec was Fritz Wilkie of Chelsea, Michigan, driving the No. 84 Mobil 1/Frozen Rotors/Hawk/Hoosier 2011 Ford Fiesta. Wilkie started the race in 18th position, and finished 10th.