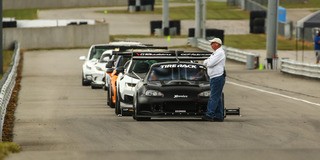 News and notes, stories and ramblings, all from the paddock at NCM Motorsports Park during the Tire Rack SCCA Time Trials Nationals powered by Hagerty this weekend.

Of the 219 registered entrants, 30 states were represented. The youngest participant is 19 years old, the oldest is 70. Women were a few but quick 10 of the entries.

And the competition keeps getting better. On Friday, three drivers went under the old track record. And with the weather improving, Sunday might turn out to be even quicker. To win a class at TT Nats is definitely an award that is earned.

From Solo To The Ultimate Team Track Day: The pandemic of 2020 has changed the world, and motorsports are no exception. The SCCA handled the peaks and valleys of the virus on an individual-event basis, with some, like Tire Rack Time Trials Nationals, set up for social distancing and infrastructure.

Unfortunately, others didn’t make the cut, and that included Solo Nationals. As a large event, known as a social gathering, and held on an airport runway with no permanent facilities, the risk outweighed the rewards.

But if the world has learned anything this year, it’s how to make lemonade out of lemons and hand sanitizer. Count Brian Peters as one of those who took advantage of an event-free fall to make his first appearance to Time Trials Nationals.

An eight-time Solo National Champion, Peters knows his way around a car. The 2015 Driver of Eminence, given annually to the driver who has consistently demonstrated excellence behind the wheel, can wheel a car.

But a full track experience? That’s different than the norm. Still, the opportunity was too good to pass up, and he lugged across the country from Arizona to spend a weekend in Western Kentucky.

“It’s been a good event,” Peters said. “They obviously put on a well-organized event. It’s a fantastic venue and I’m really happy to hear there’s a 10-year contract. It’s been fun first, and competition second, which is a nice change of pace.”

One look at Peters’ credentials shows just how difficult this event is, especially in the Max 1 class that his 2017 Chevrolet Corvette falls into.

“We’re coming into this with very different expectations, just to have fun with cars,” Peters admitted. “It’s a nice change of pace. Solo, at least for me, for so long has been so competitive that it’s nice just to come out and literally have fun with cars. We’ll see what happens.”

Virtually Racing For Real: The virtual world has proven to be a great launching pad for race car drivers, and it’s becoming more and more common. As one of the early adopters to serious iRacing, John Allen has proved on more than one occasion that the home computer set up can lead to opportunities on the track.

Allen got into racing the way a lot of people unfortunately do – “I got a lot of speeding tickets,” he’ll sheepishly admit. But he realized that wasn’t the safest way to get his speed fix. While heading to the race track seemed out of reach, sim racing was readily available.

A championship win in iRacing earned him an invite to the Mazda Shootout, which up until that point was the domain of in-car championship winners. While he didn’t win the grand prize that season, he turned a lot of heads and made contacts – and actually impressed himself.

Armed with the confidence that “real world” racing was something he could do, he scraped together the budget for a few Spec Miata races and the inaugural season of Spec MX-5. Those first two years were a mixed bag – plenty of positives to know that racing was a passion to continue pursuing, and enough lows to know there was lots of room to improve.

Allen’s new goal became taking advantages of every opportunity. His sim racing brand and communication skills allow him to coach, both virtually and in-person. A new Spec Miata build, armed with a few years of racing experience, gave him a better car and more speed.

And the SCCA’s eSports Hoosier Super Tour, launched during the pandemic, gave him a championship to race for behind the wheel of his Ricmotech home setup and, with a win in hand, a free entry to the Tire Rack Time Trials Nationals this weekend.

And so, with his Spec Miata on the trailer, Allen is exploring his first Time Trials event.

“It’s pretty intense,” he admitted. “We have the chance on the basic race weekend to qualify, and you get one of those sessions, and then some sprint races which is a little more gamesmanship and race craft, like the e-Series. This time, you’re throwing it all out there because the tenths matter and they add up over the three days to the cumulative. It’s just go, go, go, there’s no gamesmanship it’s just head down, eyes forward and get it done.”

Even better, it happens at NCM Motorsports Park, which has some personal meaning for Allen.

Follow Us From Home: The Tire Rack Time Trials Nationals powered by Hagerty continues all weekend long from NCM Motorsports Park in Bowling Green, Kentucky. Sitting in the shadow of GM’s world-famous Chevrolet Corvette plant and the National Corvette Museum, the track is challenging and technical. Live play-by-play from Gregg Ginsberg and Larry McLeod, with special guest pop-ins, can be heard at SCCA.com – where live timing also resides.