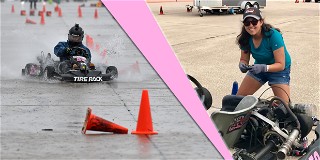 This article first appeared in the August, 2020 edition of SportsCar Magazine. Everyone can read the current and past editions of SportCar digitally here. To become an SCCA member and get SportsCar mailed to your home address monthly in addition to the digital editions, click here.

By the time you read this, we hope three things have happened. First, we hope that stay-at-home orders are back to something approaching normal life; second, that Kimsoo Gopnik, the New England Region’s 16-year-old karting phenom finally has acquired her Massachusetts operator’s license and can actually drive her 2007 Honda Civic Si; and finally, that sometime during this extraordinary summer, Kimsoo actually has had the opportunity to test her H Street Civic in competition, which she’s been aching to do ever since she acquired the car some two years ago.

“I bought it when I was 15 from a fellow autocrosser, Danny Kao, who has co-driven with my dad [RallyCross champion Chang Ho Kim],” Kimsoo explains. “I couldn’t even drive it yet, but Danny knew I was looking to buy a car, and it was already set up for autocross. So, I just went for it. I’d been saving up money since I was, like, 4, and I was able to pay for it myself, which I was very happy about.”

And, yes, the Civic is her daily driver, too.

Soon to be a junior at the Advanced Math and Science Academy (AMSA) Charter School in Marlborough, Mass., Kimsoo began her karting career at age 5, and it’s “just gone on from there,” she says, and includes a second-place finish in FJA at the 2018 Tire Rack Solo National Championships and a second in FJA for the 2018 ProSolo season.

“I work on my own kart,” Kimsoo notes. “It’s from the part of me that’s strong with independence – which, admittedly, can be too stubborn sometimes. From a young age, I was always curious how my kart worked, and I wanted to be able to help my dad. He was happy to teach me. The thing I worked on the most was changing my gear, a major part of driving a kart.”

Dad can be, and is, a big help, she adds, “But he’s not the one driving the kart, I am,” she says. “I have to be the one who understands how my kart runs and then be able to fix it and adjust it.”

That attitude has paid off when her dad hasn’t been able to attend events with her. “I would still be able to change my gear, change my tires, or almost anything else that came up,” she explains. “It always made sense to me that it’s my kart and my runs. So, I should be the one to make it run well. If I mess up, I brought it on myself, and I learn from it.”

What does she enjoy about racing and the SCCA? “Driving fast and being with friends are probably my favorites, but there are so many parts of racing that I enjoy,” Kimsoo says. “I’ve learned that motorsports are more than just fast cars, but rather the amazing people who drive them to their fullest.

“It’s strange answering questions like this,” she adds about this interview, “since motorsports and the SCCA have been constants in my life. Basically, everything I know about motorsports started with autocrossing in the SCCA.”

So, another SCCA question: What’s her most memorable event to date?

“My favorite memory is when I was driving a kart for the very first time at age 5, at a karting school in my Region,” she says after a pause. “There was a small course set up, but at the end of my first run, I decided that I loved it so much and wanted to go right back. But, when you suddenly try to turn a kart a full 180 degrees, it doesn’t quite work, and that is how I spun my kart for the first time, and wow, what a thrill. From there I was hooked on karting.”

In addition to her parents, Chang Ho Kim and Melissa Gopnik (and her grandmother, June Kim), Kimsoo points to fellow autocrossers Bob and Pam Davis, and their son, Billy, as well as family friend and road-race worker Sandy McPherson, as people who’ve had an important hand in her SCCA career, and then she adds, “There’s everyone’s racing mom, Kathy Barnes, who has always supported me and even introduced an FJC class for 5- to 7-year olds in our Region when I was 5, so I could race.”

Actually, Kimsoo points out, “There are countless others, many in my amazing New England Region family. The list could go on and on.”

What do others say about Kimsoo?

“She is a young lady who shows a competitive spirit and the highest level of sportsmanship,” Barnes observes. “She is as much a coach for the younger kids as the adults are.”

Down the road, in addition to returning to school this fall at AMSA, expanding her SCCA activities into RallyCross, and continuing to work part time at the Discovery Museum, a children’s museum focusing on science and learning in Acton, Mass., Kimsoo says she is planning to study computer science in college. But first, after high school, there will be a gap year, she says. “I want to take a year to relax and travel and do a lot more racing.”