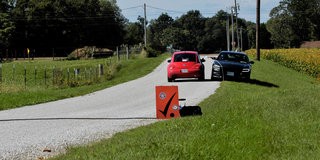 TOPEKA, Kan. (Oct. 8, 2018) -- What does it take to crown a United States RoadRally Challenge (USRRC) champion? This year, the answer for the annual SCCA event was four days, four diverse road rallies, some 500 miles of winding rural Illinois roads across from St. Louis and the Gateway Arch, 58 controls (checkpoints) and the ability to succeed in conditions that ranged from moonless fall nights to intense pop-up afternoon thunderstorms.

Hosted for the fourth time by the St. Louis Region, the 24th edition of “the Challenge” Oct. 4–7 was dominated by veteran teams. In Equipped, Bruce Gezon and Bob Morseburg won two of the four events, while Limited and Stock Challenge champions Jeanne English and Karl Broberg (Limited) and Jessica and J Toney (Stock) each picked up three class wins.

“The roads were great as usual and the concepts were well executed,” Gezon said. “It was nice to have confidence in what the committee intended for us to do. My favorite was Monopoly Redux. Tom Von Hatten did a masterful job of making an interesting and fun finish to a memorable USRRC.”

Monopoly Redux was the sole rally the three winning teams did not dominate. Based on the well-known board game, the rally was won by the Indianapolis Region’s Wendy Harrison and Craig Beidelman. In Monopoly Redux, Gezon and Morseburg finished second, English and Broberg, 13th, and Jessica and J Toney, eighth.

The Rookie Class was designed for teams who, together, had participated in no more than four national or divisional rallies. The Gateway Regional Cup was a special combination of Saturday’s Le Petit Rallye du Rocher and Sunday’s Monopoly Redux that offered new or occasional rally teams, or teams from other SCCA disciplines, an opportunity to discover classic SCCA rallying or just spend a weekend having fun with their wheels.

Jim Crittenden, SCCA Road Rally Board chair, hosted a Friday night Road Rally Town Hall meeting at the USRRC and offered these comments about the weekend: “I’d like to give a special tip-of-the-hat to our President, Mike Cobb, for attending the USRRC. The folks at the Town Hall meeting appreciated getting to meet Mike and hearing about our organization’s efforts across all SCCA programs. Mike also worked on a checkpoint crew for Saturday's rally and did a short ride-along for the first two legs in one of the rally cars. The team that took Mike on his ride-along, Chuck Larouere and Rick Beattie, from Pittsburgh, went on to win that rally (Le Petit Rallye du Rocher).”

Crittenden added: "On behalf of SCCA, we'd like to extend our sincerest appreciation to Jim Heine, Ron Ferris, Tom von Hatten, and the entire St. Louis Region rally committee for a great weekend. They provided the competitors with the complete range of rally styles (Course, Tour, and GTA), excellent hospitality and banquet, and plenty of opportunities to socialize with old friends and meet new ones. Well done folks, thank you!”