Turning a Passion into a Profession 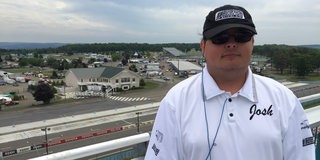 Many people dream of turning their hobby into a paying gig.  Josh Ashby, a member of Sports Car Club of America® and SCCA’s Glen Region, has managed to do just that thanks to his love of motor sport and involvement with the Club.

Back in the mid ‘80s, Ashby’s father moved the family to Watkins Glen, New York -- a beautiful, sleepy village at the southern tip of Seneca Lake.  A few times a year, however, the village would fill with excitement as a professional motor racing event would come to town and take over the legendary Watkins Glen International (WGI) road course circuit located just a few miles from the town’s center.  Because the entire Watkins Glen community got behind these events, Ashby’s father decided his family should do the same, so he started taking Josh to WGI races before he was even in kindergarten.

“Literally, I was a little kid sitting in the Watkins Glen grandstands for years,” Josh recalls fondly. “Growing up watching IMSA and the old Firestone Firehawk series set the hook for me when it comes to a passion for racing.”

With time, Josh’s passion for auto racing grew until six years ago he joined the SCCA®. He began volunteering in various ways, and one day popped up to WGI’s public address booth to watch longtime family-friend and track historian Bill Green call some races.  Soon, Josh was assisting in the PA booth.  And when Green decided to retire a few years back, Josh inherited the PA duties for Glen Region activities at the historic track.

Of course, announcing SCCA races at The Glen is not how Josh makes a living. Instead, the history buff parlayed his love of motor sports and a degree in Museum Studies from Tusculum University into a Research Assistant position at the International Motor Racing Research Center (IMRRC) in Watkins Glen.  There, he gets to help a lot of writers conduct research for various books and articles.  It also gives him the chance to delve deeper into the sport he loves so dearly.

“The International Motor Racing Research Center is a library dedicated to all forms of motor sport,” Josh said, “and one of our major collections just happens to be the SCCA archives.”

While working at the IMRRS gives Josh access to a wealth of motor sport history, being an active member of the SCCA also gives him a different kind of access to the sport -- access that can be easily obtained just by getting involved with the Club.

“Being a member of the SCCA gets you so much access at race tracks,” Josh noted. “It doesn’t matter what specialty you work. You can be a Flagger, work Tech, do anything and you are actually involved in racing.  You get better access than fans who buy a ticket to an event.”

If you’re at Watkins Glen this weekend for the Hoosier Racing Tire SCCA® Super Tour, keep an ear open for Josh’s work.  If you’re not at WGI, follow all the action online at www.scca.com/live with live timing & scoring, lap notes, live video, and Super Tour Radio presented by Hoosier Racing Tire.

Photo: Josh Ashby has found a home in motor sports thanks to growing up at Watkins Glen International and being an SCCA member.