Ruman Repeats as Trans Am Champion with Daytona Victory 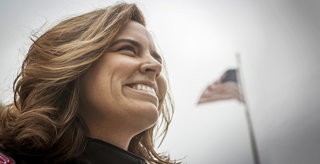 Amy Ruman, who in 2015 became the first female professional road racing champion in North America, made history again today at Daytona International Speedway as she captured the 2016 Trans Am Championship successfully defending her title and once more etching her name in to the Trans Am record book in this, the season’s 50th Anniversary Season.  Ruman’s championship-clinching victory was her third in a row at Daytona from behind the wheel of the No. 23 McNichols Company Chevrolet and saw an up-and-down season for the defending champ end on a high note.

Entering the weekend, and even through the first third of the race, victory seemed anything but assured for Ruman—very much the opposite of her first championship when she only needed to take the green flag to secure her title.   Paul Fix, in the No. 50 StopFlex/TheCarCoach.com/Techron Chevrolet Corvette, had begun the day on pole, with Ruman alongside; and Fix with a nine point lead was keeping the early challenges of Ruman at bay while setting the fast lap of the race.

However, 10 laps into the 29-lap race, disaster struck for Fix with the No. 50 suffering a flat left front tire.  Fix quickly entered the pits and the Ave Motorsports team changed the tire nearly instantaneously, with Fix reentering the race in eighth position in class only needing to work his way up to fourth, with Ruman leading, to secure the title.  But lightning struck twice for Fix and the No. 50, with tire debris damaging the No. 50’s motor on the 13th lap, leaving Fix with the only option of limping the car back to the paddock and waiting on the outcome of the race.

Ruman would continue in first, keeping distance from the battling TA class cars in second through fifth, running nose-to-tail, finally emerging after 29 laps the victor and once more the TA class champion with 299 points to Fix’s 290.

“What a great way to finish out a 50th Anniversary season for the Series,” continued Ruman. “My hat is off to Paul Fix and the Ave team; they’ve worked hard all year, too, and we’ve both had up and down seasons.  It’s unfortunate what happened to them but we persevered and won.”

The second consecutive TA championship came in a far more dramatic fashion for Ruman and, with it being the Series’ 50th Anniversary, is starting to feel a little sweeter.

“I think this is sinking in to be a little sweeter,” said Ruman.  “With the circumstances with us coming from behind, especially when you consider how the back end of this season didn’t go our way so many times, this victory feels good.  You can’t give up; you can’t throw in the towel. You have to persevere and keep your head down.  I just wanted to run a good clean race today and try and win, and see how the chips fell.  And today they fell right in our lap.”

Ruman was joined on the TA class podium by Florida’s own RJ Lopez, in the No. 06 ACPMotorsports/ Republica Brewing Chevrolet Corvette, who finished second after retaking the position with only two laps remaining, for his first championship podium of the year in limited appearances.   Jim McAleese, in the No. 03 McAleese & Associates Chevrolet Corvette, would finish third for his fourth podium.

Paul Fix would finish 13th in class but still easily hold second in the TA class championship points.  Simon Gregg finished third in the championship with 248, David Pintaric fourth with 246 and Cliff Ebben fifth with 245.