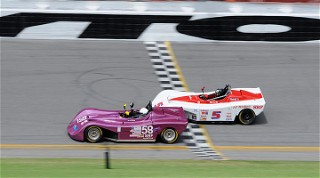 White, in the No. 58 Valvoline/Prism/The Cottages SRF, started on the Tire Rack pole and held the lead into the first turn. During the opening-lap dash for position, Stripling found his way to the rear deck of White from the fifth spot on the grid. From there, the two drivers proceeded to check out from the rest of the field. En route to the win, White led every lap around the 12-turn, 3.56-mile course. That included holding his position through the lap-three restart, which was the result of contact that left two cars stranded in Turn Five.

“Our plan was to try to jump to an early lead,” White said. “Things are ever-changing here at Daytona. So, phase one was to break away from the field and hope that Denny [Stripling] got swallowed into a passing battle on the infield. I think we were right on the cusp of that working, but then the full-course yellow came out. Then, the strategy changed to making this a two-car race and see what happens on lap 14.

Following the opening lap, Stripling, in the No. 5 SEI Motorsports/Lightspeed SRF, kept the pressure on while by staying closely behind the lead driver. Despite taking the lead from White for a moment on lap six and on the last lap, Stripling was unable to score an official lap led at the line.

“In qualifying, I worked with David Donovan and we were able to do pretty well getting toward the top of the grid,” Stripling said. “Heading into the race, the whole plan was to not let Cliff [White] get away. My car had been so good on the infield. I had to see if I could get up to White’s purple people eater, as I like to call it. That is with all respect since both the car and driver are so fast.

“We were gridding in the middle of the guys from the Northeast, so I figured I would just try to hook up with Cliff [White] early. I did that, and he played the game well. He pulled it out and backed off, when he needed. I was trying to figure out which card I needed to play on the final lap, and played it. It was the wrong one as I led the wrong 150 feet, and that’s how it played out.”

McNeish, in the No. 122 SRF, had the third position on lockdown after taking the spot during lap eight. From the halfway point of the race, McNeish ran into problems trying to get someone to work the draft with him in order to challenge the lead draft tandem.

“We were fairly close in to the lead pack early on,” McNeish said. “I don’t think the leaders had started to push that hard, yet. But, then my drafting partner began to slow a bit. I kept holding back, but then figured I couldn’t do that any longer. So, I was isolated for a while. Even with a partner, I don’t know if I could have caught them, but we would have been closer. The top two had them covered; we were close but just not enough.

“This is my first Runoffs, but I’ve run with a bunch of these guys in the Northeast. I worked with those guys through the practice days and we had a plan to stick together in the race. If you don’t have someone to work with here, you’re done.”

Robert Reed, in the No. 3 IceRacing.com SRF, and Derek Schofield, in the No. 9 PM Racing Spec Racer Ford, finished fourth and fifth, respectively, following a final push for position among five drivers.

Reid Johnson, in the No. 78 SRF, was named the Sunoco Hard Charger after starting 39th and finishing 23rd.

While the live broadcast of all 27 National Championship were available live at SCCA.com, each race will be on demand in the coming weeks.