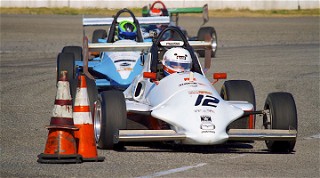 FONTANA, Calif. (January 17, 2015) – After watching their fellow competitors in the Southeast get started a week ago, the SCCA Western Conference Majors Tour raced for the first time in 2015, opening the year at Auto Club Speedway.

Seven race groups ran on the 21-turn, 2.8-mile circuit that uses both the infield road course and a large part of the oval superspeedway.

Group 1: The battle for the overall lead came from the conflicting styles of the front-wheel drive No. 23 Tom Lepper & Associates Chevrolet Cobalt driven by Carl Young and the rear-wheel drive No. 92 Bullet Performance BMW 325 of Robert Green in Super Touring Under.

Young held the early advantage, with Green giving chase through traffic but Young quicker on the banking. With Young starting to slide more through the corners on lap 10, Green hung back down the backstraight and then jumped hard on the brakes to the inside. The move stuck, and Green held on to open the season with a win.

Paul Whiting battled early in Super Touring Lite, and then pulled away for his win in the No. 51 Next Victory Honda CRX, while Tom Wickersham opened his Touring 4 season by walking away from the field in the No. 01 Maine Straight Racing Mazda MX-5.

Group 2: The debut of the Gen3 Spec Racer Ford in the Western Conference brought with it familiar contenders, with west coast stalwarts Todd Harris (No. 24 Pro Drive Racing SRF) and Mike Miserendino (No. 11 MBI Racing SRF) were joined by Steve Fogg’s No. 21 Pro Drive/Flat Out SRF in the early stages of the race.

Fogg’s run was interrupted through no fault of his own when Harris clipped an apex cone and sent it past Miserendino. Third in line, Fogg had to miss that cone and plowed through several on the exit, ending his day prematurely and leaving Harris and Miserendino alone.

Harris held on around the final lap for the season opening win.

The Spec Racer Ford class was just as competitive, with the No. 69 Team Widget SRF of Denny Fosdick and the No. 90 East Anglia Motorsports SRF of Jack Willes left to settle the lead. They swapped several times, with Fosdick leading across the stripe at the white flag. Willes moved to the outside coming back to the banking, making it stick to the surprise of Fosdick. Fosdick had one more shot at the end of the backstraight, but Willes held on under braking and through to the finish.

Group 3: Formula Mazda stole the show in the first race after lunch, with a four-car battle that looked like it would be more at home in Spec Miata or Spec Racer Ford than the “wings and things” group.

Depending on the lap, any of the four cars – Larry Mason’s No. 12 Auto Diagnostics Formula Mazda, Jerry Dutch Schultz’ No. 44 Point B Real Estate FM, Brad Drew’s No. 78 Life+Gear Lighting FM, and Tazio Ottis’ No. 72 Patrick Ottis Company – could have taken the win.

At the end, though, it was down to Mason and Schultz for the win. The two went side by side at the end of the backstraight, with Schultz moving back into the lead. Rather than panicking, however, Mason collected himself and got a run through the final corners, pulling in front on the banking and taking his first career Majors win.

How difficult was it? Mason’s heart rate monitor showed him at 178 beats per minute during the race.

Elsewhere, Timothy Day took the Prototype 1 and the overall win in the No. 8 TJR Motorsports Stohr WF1, with Chris Farrell running second in the Prototype 2 C&M Mfg/Hoosier Stohr WF1.

Group 4: Spec Miata turned on the opening lap when a pile-up occurred on the first move off the banking into the infield, stacking up most of the field and spinning out several drivers. Elliott Skeer’s No. 17 Rush Motorsports Mazda Miata was one of the contacted cars, but he escaped and continued without slowing much.

It was a fortunate move for Skeer, too, as he followed Clement Lee’s No. 68 RM Autosport Miata and Francis Hu’s No. 25 Perfomance Composites Miata as they broke away from the field. The order remained unchanged for nearly the race, each content to extend the gap until the white flag.

At that point, Skeer struck. He moved around Hu near the exact location of the lap one incident, and then chased Lee to the end of the backstraight. The pair went side by side through the corner, with Skeer emerging in front and racing to the checkered flag for the win.

Tom Wickersham scored his second win of the day, this time in GT-Lite, driving his No. 01 Maine Straight Racing Mazda MX-5 to the win when early leader Troy Ermish fell out after just seven laps in his No. 38 Datsun 510 Parts Datsun 510.

Group 6: The big bore group saw both sides of the career coin in its top two finishers. Michael Lewis’ No. 12 Goodyear/Cyclo/Red Line Jaguar XKR took the overall win in GT-1, his most recent of many SCCA wins, including multiple National Championships. Running second and winning in GT-2 was Stephanie Cemo in the No. 43 HRE Wheels/APR Performance/Sparco Chevrolet Corvette. Cemo secured her first Majors win with the victory.

Group 7: Alex Kirby’s No. 81 L.A. Prep Inc. Piper DL7/Honda got a gift in the Formula F race when, on the opening lap, contact from a car trying to make a pass to the front took out the first two running cars and caused a reaction that disable several more just behind. With most of his challengers slowed or eliminated, Kirby marched away to a 13.354-second win.

Dennis Andrade earned the Formula Vee win by a similar margin after marching away from the field. Andrade’s No. 87 D & D Racing Vortech finished 10.892 seconds ahead of the runner-up.